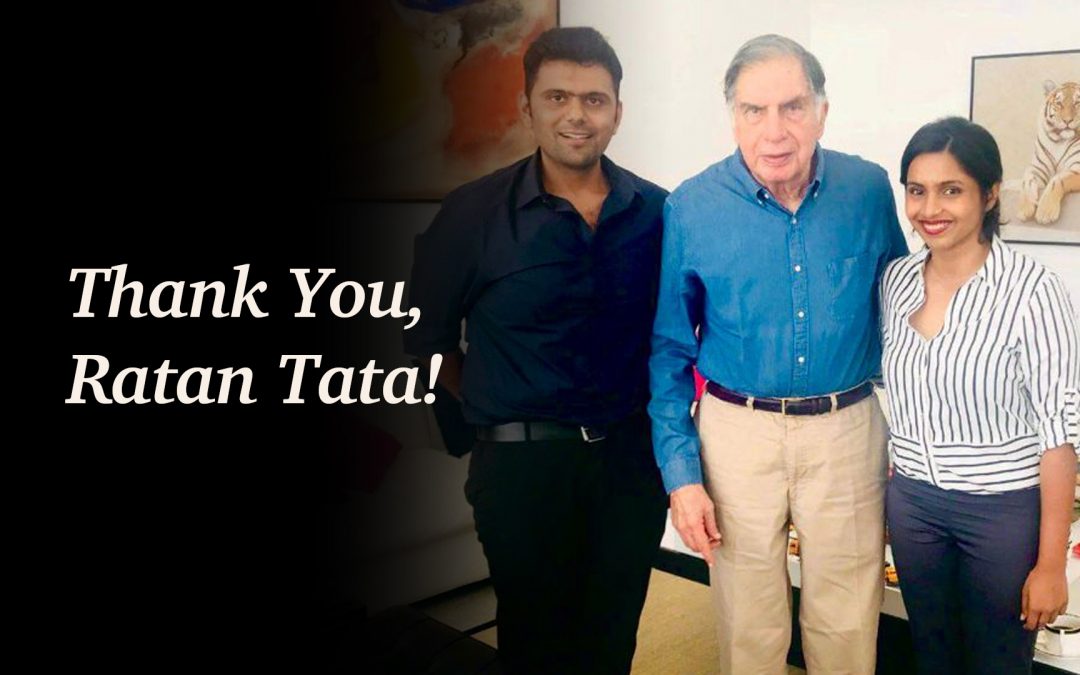 How would it feel if an idea you’ve been nurturing for a long time gets acknowledged by someone of great influence? Knowing that the same idea that was dismissed by everyone from your immediate relatives to your closest friends is now supported by a powerful man? Sounds straight out of a dream, right?

It was a ‘pinch-me’ moment even for me and my husband Chetan.

Just like every other idea, Repos too started with a eureka moment, a point where we realised, “This is it!” It all started on a stormy afternoon in 2017 when the city was on the brink of total darkness due to constant blackouts, and our phones were ringing with demands for doorstep fuel delivery from various businesses. Back then, we were still working at the family petrol pump and catering diesel delivery orders using tankers. We heard a knock and saw an Amazon delivery boy carrying a book that I had ordered only a short while before. That’s when the idea of doorstep diesel delivery ignited our minds! We thought, “how convenient would it be if businesses that use diesel in bulk could place orders using their phones and a smart vehicle would deliver it right to their doorstep?”

After that, we spent nights developing the idea and putting in research. The next step came very naturally to us. We knew that we had to talk to somebody who could give us some much-needed advice on how to go about the execution of the idea. Both Chetan and I decided to visit our idol, Ratan Tata, an Indian industrialist and former chairman of Tata Group, with great faith in our plan and confidence in our noble intention. However, before I go ahead, here’s a warning! Our tale of reaching out to Ratan Tata might appear like an instruction manual to you, but it truly shows what a little perseverance can accomplish. Trust us when we say that even we didn’t think it could be a possibility before we tried it.

We travelled from Pune to Mumbai, arrived outside his house, and waited for hours trying to meet him. Finally, we wrote him a letter outlining our plan and sneaked it inside the house asking him for a meeting. We came home that night, hoping to try again the next day. At around midnight, our phone rang. It was a landline number. Tata gave us an appointment for the next day!

We arranged a 3-dimensional model of our business overnight and dressed in our best. Would you believe it that a supposed fifteen minute went on for over an hour? We couldn’t either! The fact that fuel retailing was arguably the only area that had seen no innovation piqued his interest in the concept. He encouraged us to consider the big picture and work toward creating an ecosystem for fuel distribution. He even gave us seed money to start, giving us a much needed push.

From here, the voyage of Repos began. Now we had Mr. Ratan Tata’s trust, who had not only guided us but also supplied us with funding. Honestly, if I may admit, Repos’s journey has not been without its setbacks and difficult nights. It’s true we anticipated there would be challenges as we embarked on a unique adventure that would change the energy distribution system. From ministry reform discussions to business model development, dealing with a pandemic like Covid-19 twice in two years, we went through it all.

In 5 years, more than 5.5 crore Litres of diesel have been sold through the platform with the support of 250+ staff members working day and night and leaving their watches at home. We have also enabled over 750 fuel entrepreneurs while expanding our presence in 220+ cities.

Despite how absurd it may appear, no biometric method was ever used to keep track of the attendance of this massive workforce. There was a Whatsapp group in place, and we made sure to keep track of each other. Even though we were on a noble mission, we eventually realised that our system wasn’t going to work when it came the time for raising funds. We did our work with the highest level of sincerity but we did it as best as we could without any external help. Soon, with a focused staff dedicated to making this idea a reality over time, we could easily streamline our organisational processes. 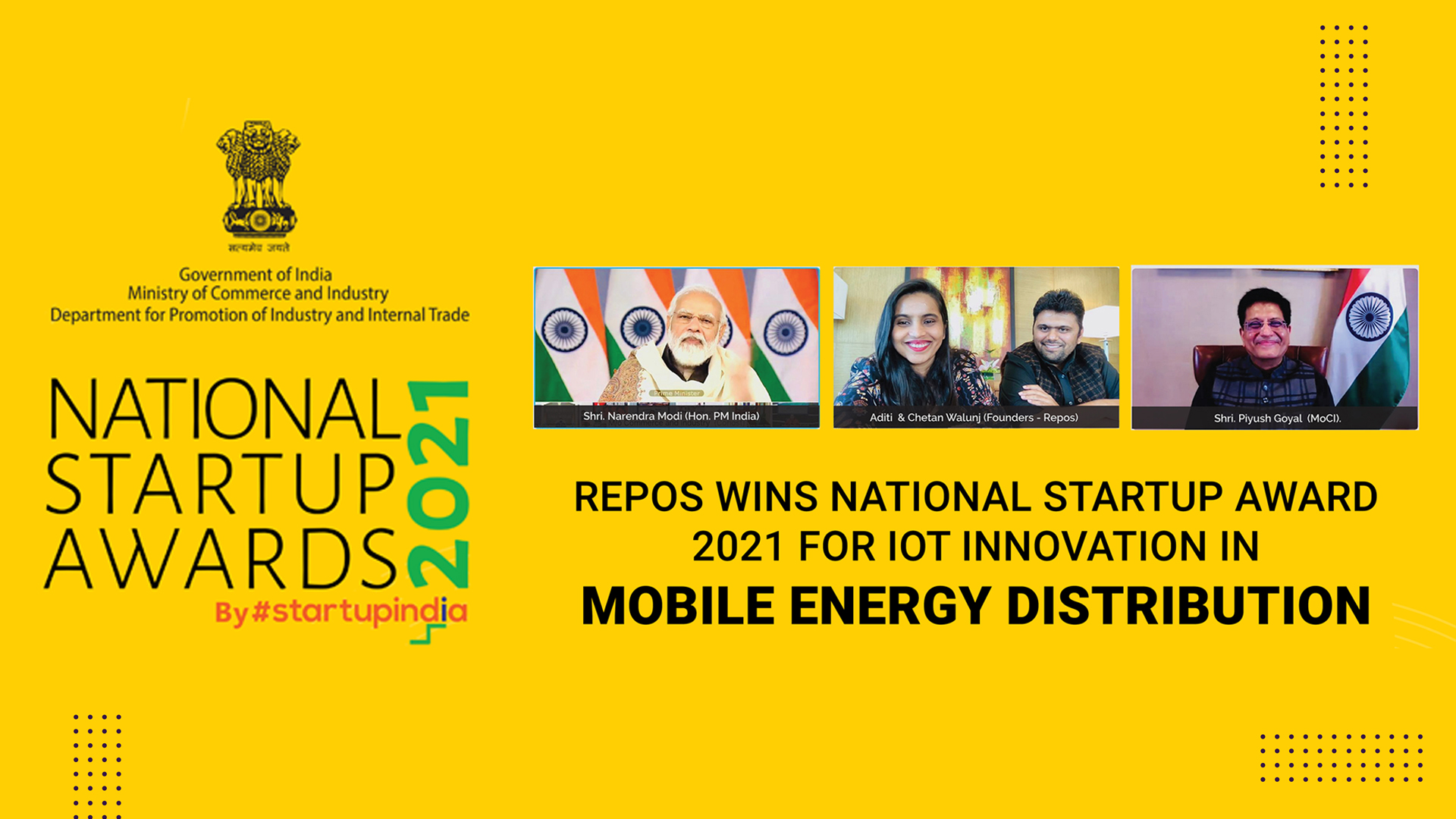 And, then came the historic moment when our unwavering commitment and faith were ultimately rewarded. Repos received the most prestigious award in its history, the National Startup Award in the IoT subsector, on January 16, 2022. It was on the same day that our Hon. Prime Minister Narendra Modi declared it ‘National Startup Day’.

We began receiving calls from a number of investors who were interested in funding our business concept, despite not understanding its full scope. We realised that we needed to partner with people who would share our values rather than merely want to make a profit.

In a surprising turn of events, on the 16th of May, on the auspicious day of Budh Purnima, a confirmation mail from the secretary of Ratan Tata dropped into our inbox.  The message clearly stated that we had finally received the first tranche of the pre-series A round of funding of 560 million from the Chairman Emeritus of Tata Sons, Ratan Tata and other undisclosed investors.

We were on cloud nine! It took a good 10 minutes for me and Chetan to come to terms with what had just happened!

We enjoyed the day with our customary zeal in our office, followed by meditation and a delectable supper. For the second time, our genie (Mr. Ratan Tata) has put his faith in us with a sincere message at the end: “Repos is a well-thought-out idea with excellent implementation.” I wish them the best of luck. “

Our emotions are overflowing with excitement, ecstasy, and appreciation, and I’m running out of words to convey my thanks to Mr. Ratan Tata as I type this!

If you ask us what this journey has been for over 5 years, we will reply in a heartbeat that it is nothing short of a dream. A dream which, fortunately, we get to live every day. It is a dream that is now the dream of 250 other people who have joined this bandwagon.

An initiative which started with only one fuel and is now growing into multiple energies.

An idea that took off with a team of 2 people on day 1, has today grown up to 250+ people sharing the same dream.

But of course, we have been lucky! Lucky to have met people like Mr. Ratan Tata who, with his generous funding and valuable advice, has not only believed in us once but twice. We thank him from the core of our hearts for being that Maseeha (angel/hero) who has come to life to make us win.

It is a dream that we live.