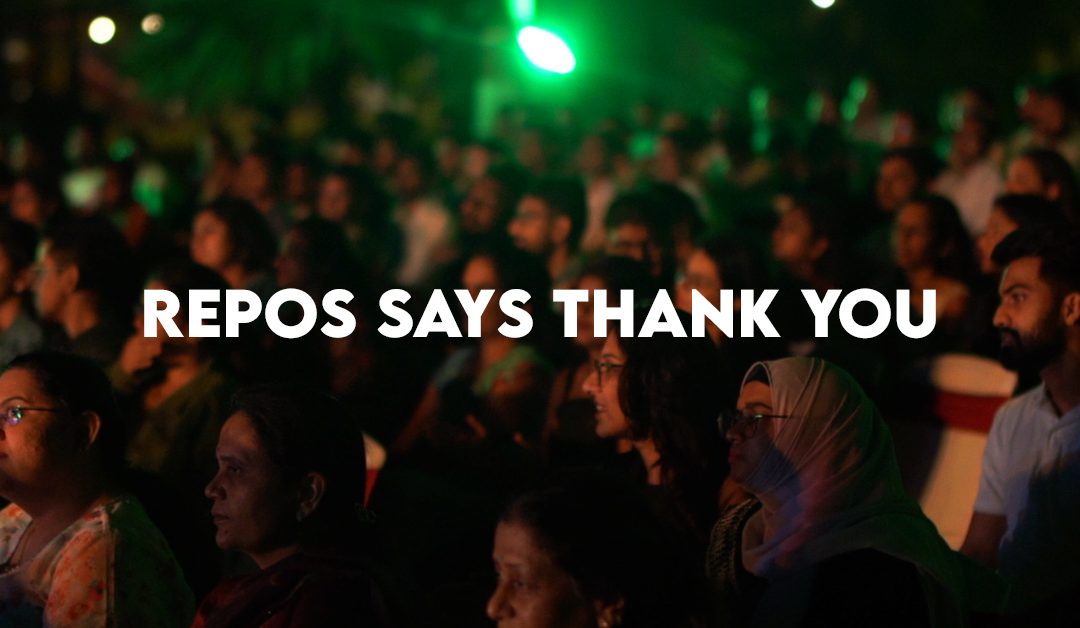 Thank you- two simple words that are taught to us by way of repetition when we are little children. We are encouraged to say it in school every time someone gives us something or does something for us. As we grow older, it becomes less of a conscious effort and more of an effortless habit. Sometimes, these two priceless words are accompanied by a warm hug, a smile, and sometimes, even an award. These two words ensure that no good deed or word goes unnoticed. And that is why saying thank you matters…

Thankfulness is a virtue that is deeply rooted in the foundation of Repos. Now and again, we are even encouraged to say thank you with or without a reason. And trust us, it works!

This year at our Annual General Meeting, Repos also wished to thank all the hustlers, a.k.a. Reposians, who kept the Repos ethos and left no stone unturned to meet the organisation’s expectations and values.

Wait! You must be wondering what these values are! Let’s go over them once again quickly:

But how did we choose the best performers? What were the data points? Who burned the midnight oil to keep the scorecard up to date at the end of the financial year?

Let’s go back to when all of the team leads were given an ultimatum to complete their own Performance Management Systems (PMS) and check to see if their associates had done so as well. Some of us came to work with a long frown as we hadn’t taken the effort to update it on time. But, little did we know that the PMS rating at the end of each quarter would be a significant statistic that could earn us an award and exciting prizes at the AGM!

Cut to April 21st, 2022: the D-Day, the penultimate night of AGM held at Kashid Beach in Alibaug. The wind from the sea blew in our faces as the Sounds of Yes performance got underway, and everyone was dressed to the nines, with the ladies looking stunning and the men of Repos looking dapper in their three-piece suits.

And then the founders stepped onto the stage to tell us that what comes next is Repos’ way of saying thank you! What could it be? The rows in the audience were filled with quiet chatter and puzzled expressions?

As the first award of the evening, the star performers from each department were announced one by one. Believe it or not, it was based on each individual’s PMS scorecard highlighted at the end of the financial year.

There were broad smiles and bewildered expressions on the faces of the winners while they walked up to the stage to receive their awards. Big waves of applause from the team members, who were hooting for their colleagues roared in the most passionate way. Some had a knot in their throats when asked to speak a few words about winning an award, while others refrained and repaid the kind gesture with warm hugs and firm handshakes.

However, you’ll be misled once more if you believe that the final decisions on such a crucial night are made only by an automated system. There were still three categories of Best Team, YES Award, and Reposian of the Year that honoured the unsung hustlers of Repos who never fail to keep Repos’ real spirit alive and whose achievements were too many to list on the PMS. On that night, we honoured the team that embodied the motto “Hum sath sath hai.“

The Yes Award was given to the person who never said NO to any work, even at the odd hours of the night. Someone who had a gregarious appetite for learning even in the face of tough times.

The Reposian of the Year, who, no matter how difficult the circumstances were, always found a solution to any problem.

The achievers of the evening weren’t the only ones that walked back to their respective rooms with an award. Repos said Thank You to everyone in attendance, saying that no contribution is insignificant when the goal is to help humanity. At the end of the night, we were recharged with the zeal to do a little more, to stretch harder, and to always be grateful for everything we have.