I went from being an intern to a lead in just 2 years! 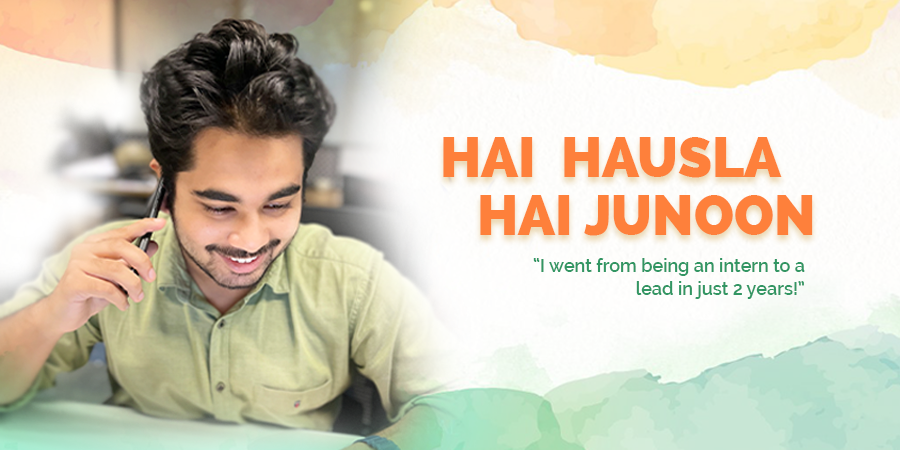 The associate lead in the marketing team and our jovial Reposian, Vedant Chavan, blushed like a bride when he heard his story would be the first to be included in the #HauslaJunoonStory section.

Even though he had just been raised to the lead post with an appraisal, he replied modestly that not much had changed since the promotion. “If it weren’t for the responsibilities, I wouldn’t consider myself a leader; I’m just here to work,” he said, sipping his morning chai.

In the year 2020, when the entire world was coping with the pandemic, Vedant, a fresh computer science graduate from Pune University, joined as a data management intern at Repos Energy. Without blinking an eye, he said, “2020 has been an ‘exciting’ year for me. When the entire world was struggling with layoffs and mass unemployment, it was the year I secured my first job. Repos provided me with an opportunity to prove my abilities even in these turbulent times. “

Vedant found his work to be challenging at times because there was no standard for him to measure himself against. He had to build a whole data management system from scratch and integrate marketing automation tools in order to streamline the internal reporting and lead flow.

Since then, there has been no turning back, and in May 2022, he was handed over the promotion letter to become a leader. When asked about his journey from an intern to a lead, Vedant grinned and said, “I am grateful that straight from the beginning I have had the pleasure of working under the leadership of the founders. They tossed balls at me and made me adept at handling all of them and taking them to the goal post. Working closely with the company’s leadership has only boosted my confidence and made me more aware of how my particular contribution aids the organisation in achieving its goals. A desire to achieve carbon neutrality on the earth and a willingness to improve the world for the better. “

Known for having a laser-like concentration on his work Vedant loves Bollywood music and is a huge Leonardo DiCaprio fan; his favourite film is The Wolf of Wall Street. As a new leader, Vedant plans to assemble a team for e-commerce that will further integrate cutting-edge tech tools to improve software stacks.

As we both got up from our chairs after sipping our chai to the very last drop, I asked you how you managed to become a leader in such a short amount of time and what your slogan could be. To this, he made a quick reference to one of his favourite movies. — “Without action, the best intentions in the world are nothing more than that: intentions.” – Jordan Belfort: The Wolf of Wall Street.