75 Contributions of India to the World- Part 4/5 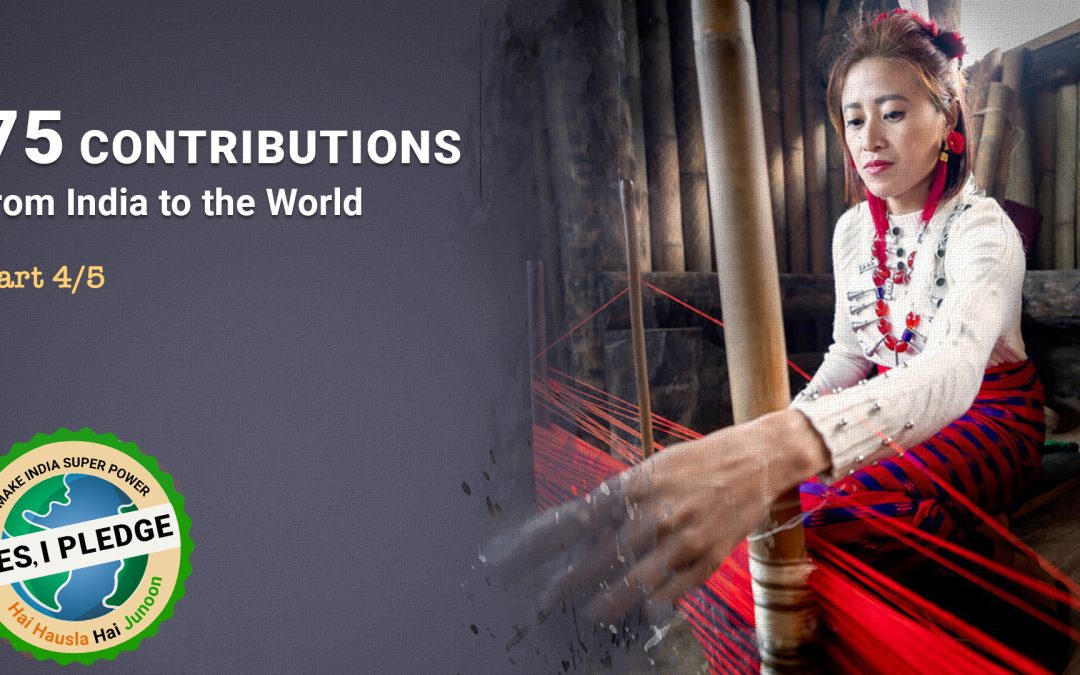 India is a country of mystery, heritage, culture, and literary genius that has made significant historical contributions to the advancement of world culture and merit. Our nation has introduced ground-breaking technologies over time for mankind to progress and discover, despite being saved from the numerous ravages of time.

On the completion of the 75th year of Indian Independence, let’s turn the pages of history and go back in time to honour India’s 75 contributions to the world.

This series will consist of 5 parts. This is part 4/5

FIBER OPTICS – Dr. Narinder Singh Kapany, an Indian-born American physicist, is the man behind the invention of Fiber Optics. In the small fast and globalised world, the urgency to transfer information freely and to have instant access to knowledge would have been difficult to obtain previously. This easy access and swift transfer of knowledge is now facilitated by fibre optics.

MUSLIN FABRIC – Muslin is a plain weave derived from the land of Bangladesh. Bengali Muslim was traded across countries, beginning in Islamic regions and ending in Central Asia, and is well known for its delicate sheers to coarse sheeting.

CALICO – Calico is a plain woven textile made from unbleached and often not fully processed cotton. The fabric is less coarse and thicker than canvas and denim, but it is cheap because of its unfinished and undyed appearance.

CASHMERE WOOL – Cashmere wool simply known as the cashmere, is a fibre obtained from cashmere goats. This kind of wool fiber is used for clothing and other textile articles, obtained from the neck region of these goats.

CULTIVATION OF JUTE – Jute has played a significant role in the history and culture of Bangladesh’s southwest region, including East Bengal and some areas of West Bengal. The British have been engaged in jute trading since the seventeenth century. Jute processing and the sale of jute-based manufactured goods helped British jute barons become wealthy. The British East India Company and the Dundee Jute Barons established numerous jute mills in Bengal, and by 1895, the Bengali jute industry had surpassed the Scottish jute trade.

COTTON CULTIVATION – The earliest cultivation of Cotton was traced back at the site of Mehrgarh and Rakhigarhi in between 6000 – 5000 BC where cotton threads have been found preserved in copper beads. The fibre is most frequently spun into yarn or thread and used to create a soft, breathable, and long-lasting textile. It is known that cotton has been used for clothing from ancient times. Cotton fabric remnants from the Indus Valley civilization and Peru that date to 6000 BC both have been discovered. Although cotton has been grown since antiquity, it wasn’t until the cotton gin’s development that the cost of manufacturing was reduced, making cotton the most extensively used natural fabric for apparel today.

CARDING DEVICES – Carding device is a textile technology invented in India during 2nd Century. Carding is a mechanical process that disentangles, cleans and intermixes fibres to produce a continuous web or silver suitable for subsequent processing.

BANGLES – Traditional rigid bracelets called “bangles” are typically constructed of metal, wood, glass, or plastic. In the Indian subcontinent, Southeast Asia, the Arabian Peninsula, and Africa, women wear these jewellery most often. Bangles constructed from materials including sea shells, copper, bronze, gold, agate, and chalcedony have all been discovered in the past in archaeological sites all throughout the Indian subcontinent.

WATER CLOCK – Kameswara Rao, famous Indian Astrophycisist said that pots excavated from the Indus Valley Pakistan site of Mohenjo-daro (around 2500 BC) may have been used as water clocks. They are tapered at the bottom, have a hole on the side, and are similar to the utensil used to perform abhiṣeka (ritual water pouring) on lingams. N. Narahari Achar and Subhash Kak suggest that the use of the water clock in ancient India is mentioned in the Atharvaveda from the 2nd millennium BC.

INK – India ink was first invented in China though materials were often traded from India, hence the name.The traditional Chinese method of making the ink was to grind a mixture of hide glue, carbon black, lampblack, and bone black pigment with a pestle and mortar, then pouring it into a ceramic dish to dry.

WEIGHING SCALES – Weighing scales have been discovered in the Indus River Valley in necessity for the merchants to assess the value of goods that could not simply be counted by the pieces. The measure was made by putting the object on one plate and weight-setting stones on the other until the equilibrium is reached.

SHAMPOO – The word Shampoo comes from Indian word Champo which means to massage with scentful liquid and dates to 1762. It originated in the eastern regions Mughal Empire. In India, a variety of herbs and their extracts were used as shampoos since ancient times.

RULER – Ruler is an instrument used in geometry, technical drawing, printing and measuring distances. The first measuring rod was invented in the 2650 BC and were made up of Ivory used in the Indus Valley Civilization.

BUTTON – A button is a small fastener which secures two pieces of clothing. Buttons were made from seashells and used since the Indus Valley Civilisation.

FLUSH TOILETS – A flush toilet is a toilet that disposes of human excreta by using water to flush it through the drainpipe to another location for hygienic disposal. These types of toilets were in each and every household in the cities of Harappa and Mohenjodaro during the Indus Valley Civilisation.