75 Contributions of India to the World- Part 3/5 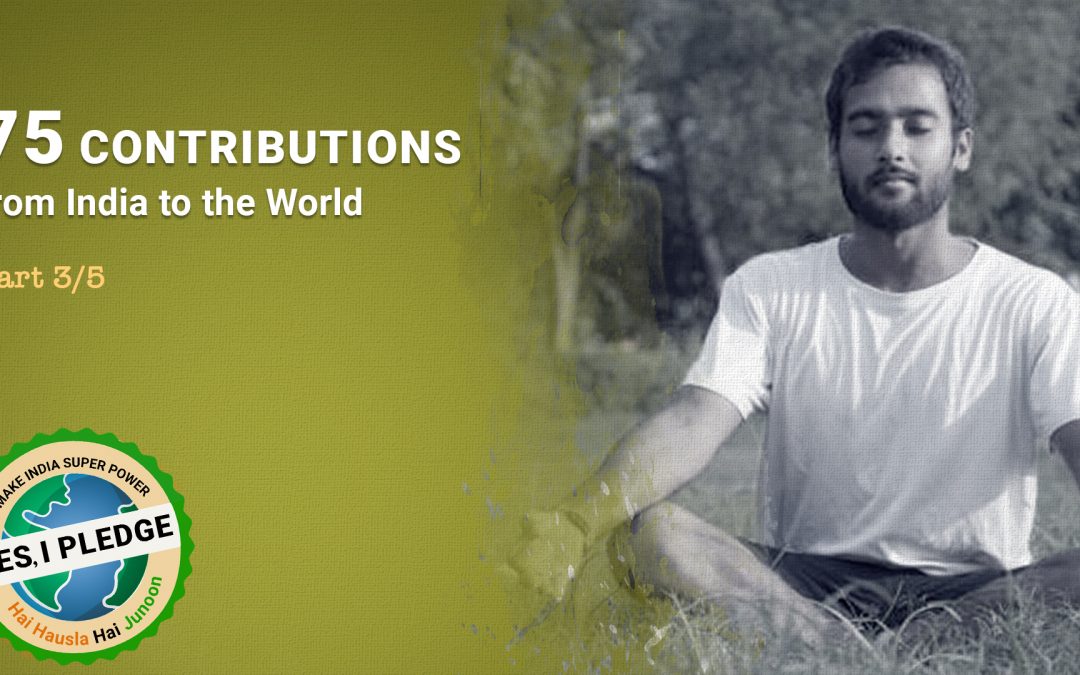 If you’ve followed through Part 1 and Part 2 of this series, have a look at 15 more things that India has contributed to the world! From the smallest of tools that make life convenient to large systems that rule the universe, Indians can proudly say that, “We did it first.”

On completion of the 75th year of Indian Independence, let us look at 75 contributions India has made to the world.

This series will consist of 5 parts. This is part 3/5

DIAMOND MINING AND DIAMOND TOOLS – Diamond mining is said to have originated in India over 5000 years ago and the country remained the only source of diamonds until the 18th century when diamonds were discovered in Brazil.

FIRST GRANITE TEMPLE OF THE WORLD – The Brihadeeswarar Temple in Tamil Nadu is the world’s first complete granite temple and a brilliant example of Dravidian temple architecture carried out under the Cholas. This temple is even part of UNESCO World Heritage Sites.

AYURVEDA – This 5000-year old science is considered a boon to humanity across the world. It is a body of science that deals with safeguarding health and enhancing longevity of life. Even though Ayurveda has been adopted by the West, sometimes accurately and sometimes with flaws, India still continues to be the epicentre of Ayurvedic best practices followed to this day.

HOSPITALS – Brahmanic hospitals were established in erstwhile India and present day Sri Lanka as early as 431 BCE by the Indian emperor Ashoka. Two kinds of hospitals, one for people, and one for animals, were erected. Where there were no healing herbs for people and animals, he ordered that they be bought and planted.

YOGA – In the 1980s, Yoga was popularised in the West as the exotic new way to maintain physical wellbeing. However, yogic traditions have been at the core of Indian civilisation even though there is no consensus on its exact chronology.

CURE FOR LEPROSY – The first exclusive vaccine for leprosy was made in India.

PLASTIC SURGERY – Would you believe that plastic surgery has its origins rooted in the Indus Valley Civilization? Sushruta, one of the earliest surgeons of recorded history (600 B. C.) is believed to be the first individual to describe plastic surgery.

CATARACT SURGERY – Cataract surgery used to be performed in India during 300 CE by Indian physician Sushruta. This surgery was performed using a special tool called jabamukhi salaka, a curved needle used to loosen the lens and push the cataract out of the field of vision.

ANAESTHESIA – India’s Sushruta used cannabis vapours to sedate surgical patients. Over centuries, other herbs like aconitum came to supplement that sedation in India.

BINARY CODE – The Indian scholar Pingala developed a binary system for describing prosody in the 2nd century BC in his Chauda Shutram.

PENTIUM CHIP – Vinod Dham is known as the Pentium engineer because of his incredible contribution in the making of Intel microprocessor.

VISUAL J – This programming language was developed by the Hyderabad-based Microsoft India Development Center at HITEC city in India. This is a transitional language for programmers of Java and Visual J++ languages.

AADHAR CARD OF INDIA – Aadhar is a 12 digit unique- identity number issued to all Indian residents based on their biometric and demographic data. It is the world’s largest biometric ID system with over 1.133 billion enrolled members as of early 2017.