75 Contributions of India to the World- Part 2/5 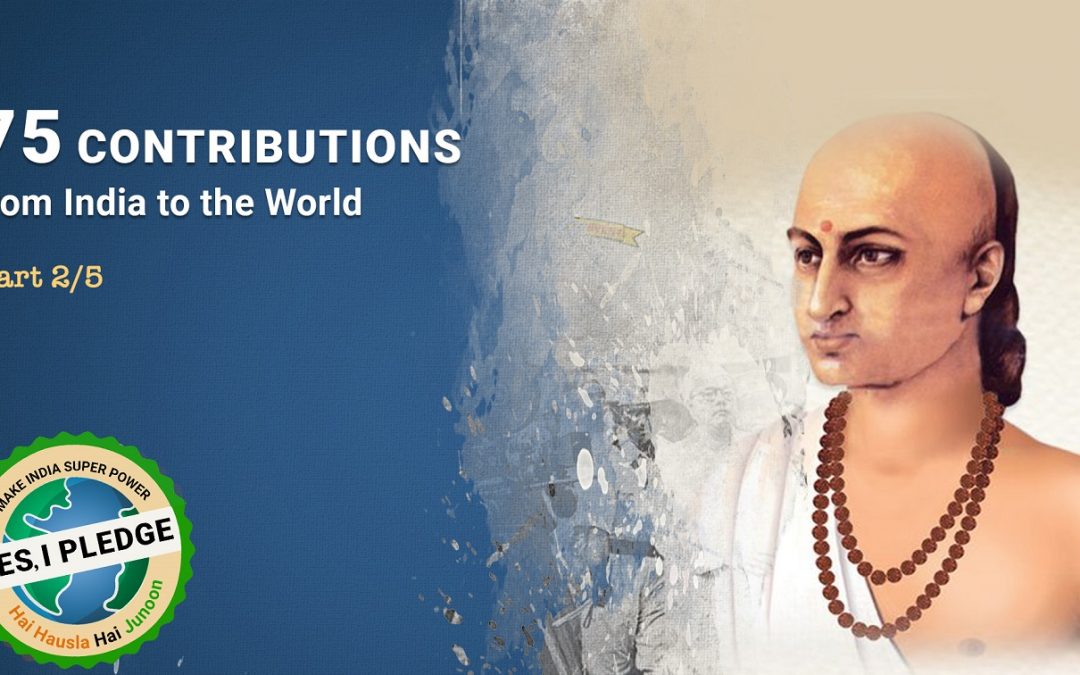 In the history of knowledge, India has always been a major player. The origins of several inventions and discoveries that have gained widespread recognition may not bear our name, but they may be traced back to our earlier works.

Let’s examine the 75 things India has contributed to the world in the 75 years since it attained freedom.

This series will include 5 parts. This is part 2/5

RADIO- In 1894, the Bengali Physicist Jagadish Chandra Bose, demonstrated publicly the use of radio waves in Calcutta. He also ignited gunpowder and rang a bell at a distance using electromagnetic waves, showing independently that communication signals can be sent without using wires.

CRESCOGRAPH- Sir Jagadish Chandra Bose is considered the father of Bengali science fiction, had invented the crescograph, a device for measuring the growth of plants.

TIME TAKEN BY THE EARTH TO ORBIT THE SUN- The famous Hindu Mathematician Bhaskaracharya was the first Indian to calculate the time taken by earth to revolve around the sun to nine decimal places, i.e., (365.258756484)

NON-VIOLENCE- Ahimsa-vrata or non violence is an attribute of soul that means strengthening the feelings of a person in relation to the observance of is inner self. Mahatma Gandhi was a preacher of this virtue and gave “non-violence” a global appeal and soon it engaged world attention.

DIVERSITY- The concept of diversity encompasses acceptance and respect. It means understanding that each individual is unique and individual indifferences. The Upanishads and the Vedas, the oldest relic of the world several millennia ago echoed the concept of “One family”.

SUGAR REFINING- The invention of sugar refining from sugarcane juice started a little over two thousand years ago in India in the early centuries AD.

CITY PLANNING- Urban planning can be traced to the cities of bronze age Indus period  (2600 – 1900 BCE). Cities such as Dholavira, Ganweriwala, Mehragarh and Harappa and mohenjodaro sit at the centre of India’s city planning heritage.

SHERING INTERFEROMETER- Invented by M.V.R.K Murty and E.C Hagerott, a shearing intereferometer is used to observe interference and to use this phenomenon to test thecollimation of light beams using laser source for measuring refractive index.

The iron pillar of Qutub Minar is nearly 24 feet tall and weighs 6 tins. It is still considered as the marvel of the Indian architecture and is still a mystery to the world.

ZINC AND ORE EXTRACTION- The Chakra Samhita is thought to have been written with a metal which when oxdised produced Pushpanjan, the metal is thought to be zinc oxide. Smelting and extraction of impure zinc by reducing calamine with wool and other organic substances was accomplished in the 13th century in India.

CRUCIBLE STEEL- Wootsz steel is a crucible steel characterised by a apattern of bands, formed by sheets of micro carbides within a pearlite matrix in higher carbon steel. It is the pioneering steel alloy matrix developed in Southern India in the 6th century BC and exported globally.

STUPA ARCHITECTURE- Stupas were built within Buddhist Monastic complexes and they replicate in stone older stupas made of baked bricks and timber. Sanchi, Amarnath, Sarnath, Amravati and Bharhut are examples of Stupas that were shaped in stone imitating previously existing wooden parts.

STEP WELL- Stepwells are examples of the many types of storage and irrigation tanks that were developed in India, mainly to cope with seasonal fluctuations in water availability.

DOCK- The world’s first dock at Lothal was located away from the main current to avoid deposition of silt. Oceanographers observed that the Harappans had a great observation power to built such a Dock on the ever-shifting course Sabarmati exhibiting superlative prowess in hydrography and maritime engineering.

IVORY– Ivory is a hard, white material from the tusks and teeth of animals that can be used in the art of manufacturing. Ivory crafts were popular during the Kushan period, as suggested by the abundance of ivory artefacts found at Taxila and Begram.