75 Contributions of India to the World- Part 1/5 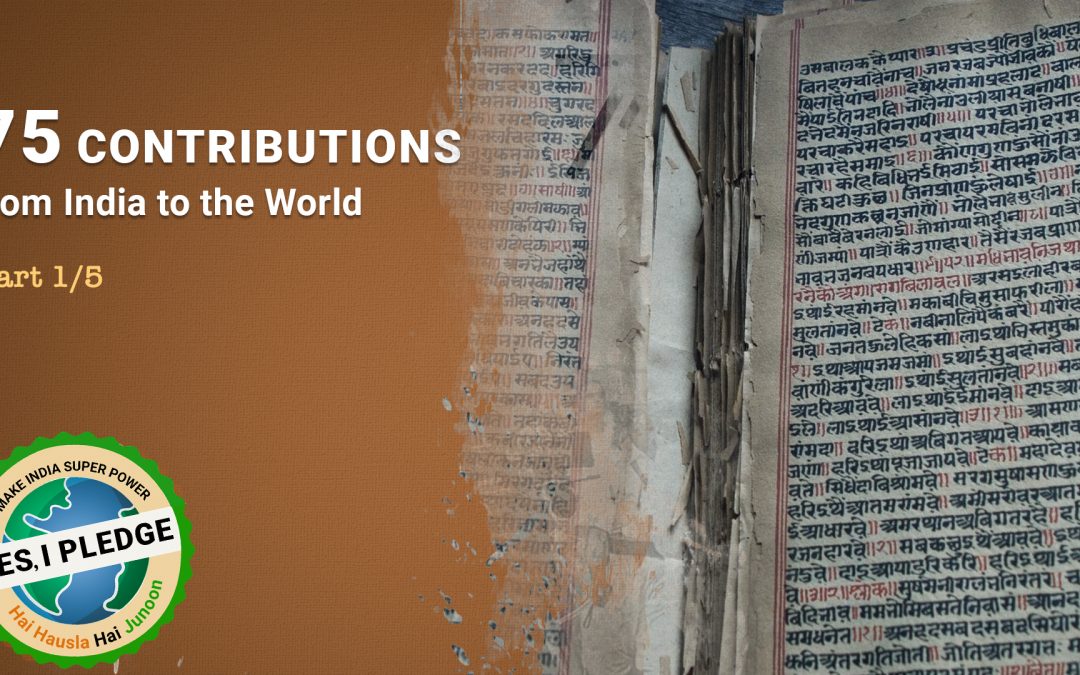 India has always led the world in terms of knowledge. We may not have our name on certain discoveries and inventions popularised around the world, but the foundation of those offerings lie in our ancient texts.

On completion of the 75th year of Indian Independence, let us look at 75 contributions India has made to the world. This series will consist of 5 parts. This is part 1/5

ZERO- Developed in the 5th century BC by the Indian Astronomer and Mathematician Brahma Gupta. Zero changed the face of modern mathematics for the world!

MOLECULAR BIOPHYSICS- G. N. I. Ramachandran is considered one of the founders of Molecular biophysics. Without this steam of studies, we wouldn’t have many life-saving treatments available today!

TAKSHASHILA UNIVERSITY- The world’s first university with more than 10,500 students was established in 700 BC. The university boasted of 300 lecture halls during the 800 years that it was in operation!

TRIGONOMETRY- Another Indian Mathematician and Astronomer, Aryabhata laid the foundation for trigonometry. An interesting fact is that the early Indian words jya and kojya actually became sine and cosine after a mistranslation!

UNIVERSE- The earliest known philosophical model of the universe is found in the Vedas, describing the repeated cycles of creation, destruction and rebirth, with each cycle lasting 4,320,000 years!

DECIMAL NUMBER SYSTEM OF THE PLACE VALUE 10- Is this bringing back memories from school? While the concept of place value may have come from Mesopotamia, the Indians were the first to use it with a decimal base of 10!

PYTHAGORAS THEOREM- You may be confused, but the Pythagoras Theorem was actually explained by Indian mathematician Budhayana long before the Greek philosopher was even born!

FIBONACCI NUMBER- The Fibonacci sequence appears in Indian mathematics in connection with Sanskrit prosody (the patterns of stress and intonation). Another Indian invention with a non-Indian name associated with it!

CONCEPT OF ATOM- Indian sage and philosopher, Acharya Kanad, formulated the theory of Atoms 2500 years before Dalton. He realised this when he couldn’t divide food particles beyond a certain point. He called this invisible matter Parmanu or Anu (atom).

WATER ON MOON- The first evidence of water in the moon’s atmosphere came by an Indian device, Chandra’s Altitudinal Composition (CHANCE), mounted on the Moon Impact probe released from Chandrayaan- 1.

NAVIGATION- The early Hindu astrologers are said to have used the magnet in fixing the North and East, in laying foundations for different religious ceremonies. The word Navigation is derived from Sanskrit word ‘Navgatih’.

ASTRONOMY AND COSMOLOGY- Ancient Indians made the calendar based on stars and constellations and developed the nakshatra. In this regard, Brahmagupta’s contributions are widely acknowledged.