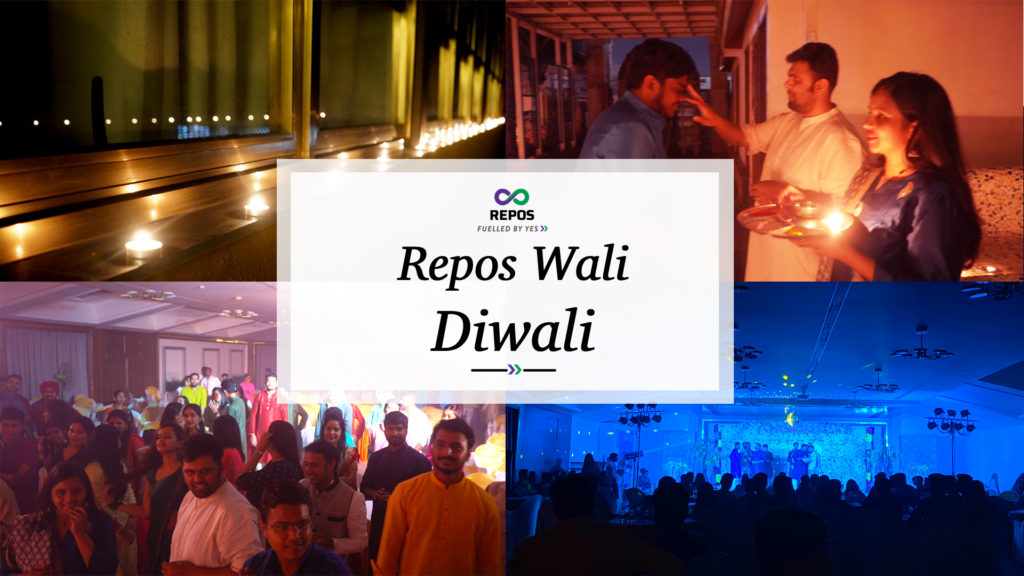 Do you remember the cultural day when you were in school or college?

The fun & excitement of choosing a song, crafting dance moves, planning the performances, and my personal favorite task of sorting food. This, of course, comes with the goofy moments of laughter and joy bringing in a sense of unity.

My memories instantly turned into a reality as the same sense of excitement & joy could be felt in the air as soon as it was announced that there will be a grand Diwali celebration night!

At Repos, celebrating our accomplishments, big or small, is part of who we are, and after the year everyone has had, this Diwali it was time for a grand celebration.

Immediately, every team began planning their own dances, skits, and song performances like we were all back in school, all set to light up the stage on Diwali Night! On the eve of Diwali Night, the office was lit up with festive decorations as work took a backseat & the office was buzzing with dancing teams & traditional music.

One by one whenever a team-mate entered looking dazzling in their Kurtas & Kurtis were given a loud cheer.

We began our ride to Rajratna where something beyond special awaited us!
The stage beautifully decorated and a disco ball placed perfectly above the room to light things up.
And finally, the moment we were all waiting for, the performances began.

After this point, it felt like the rest of the night was all just a combination of joy, bliss, laughter & appreciation.

Often we have no idea about the talents, skills sometimes even the names of our colleagues working in different departments.

This was a night to appreciate our teammates & the relationships we’ve built as well as a chance to create new ones!

Just when we thought we’ve seen the best performance of the night, the next one tops it!
Definitely a few nominees for Dance India Dance next season.

The rocking dances & the soulful melodies even had our founders dancing along with the entire team!

As the night came to a close, our founders gave a huge shout out to our in-house emcees Sumit & Savita, our party planning crew, and everyone that worked tirelessly to coordinate the event to perfection.

The night was made even more special with their humor & appreciation however the night ended, leaving a small tear on several faces, as Chetan Sir & Aditi Ma’am bowed down to salute the entire team, thanking all of us.

A mutual hug of appreciation was felt all around the room & a sense of unity established as we headed out to savor the delicious food that was specially prepared for us.

A special Diwali gift arranged for every team member to take home along with special memories that we all made together.

The night came to a close as we headed home with our belly & hearts full, in a state of complete bliss.

Repos wishes you a safe, responsible & the happiest Diwali!