Forbes Feature-Reimagining how you buy diesel 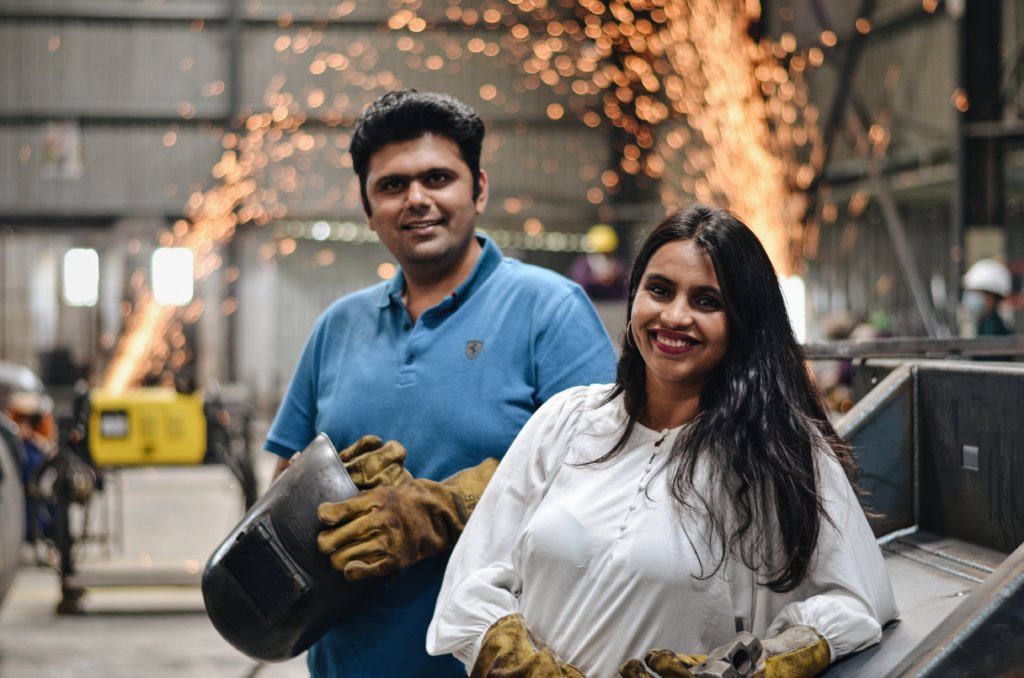 Soon after he entered his family fuel retailing business, Chetan Walunj noticed a strange dichotomy. A few kilometres away from their outlet in the industrial area of Chakan, near Pune, Mercedes Benz was working on expanding its factory. While the work was being done according to their global standards, diesel was transported in jerry cans and housed in a not-so-safe manner. “The fuel was being stored in a very makeshift manner,” he says.

In coming to Walunj’s fuel outlet, Mercedes had to spend a lot on ‘dead mileage’—industry parlance for the fuel expended in getting to an outlet to top up supplies. At the same time, Walunj knew that the only way to grow the business was to either increase the fuel sold through their outlet or add new outlets. The latter was time-consuming and expensive. He began to explore ways to increase the throughput of his existing pump.

Why not supply Mercedes diesel on-site was an idea that occurred to Walunj and his wife Aditi Bhosale Walunj, a partner in Repos Energy. No sooner had they thought of the idea they realised the challenges they’d have to overcome. For starters, the legislation then required fuel to be sold only at a fuel retailing outlet through pumps whose standards were certified by the Petroleum Explosives and Safety Organisation. Sales elsewhere and by any other means were illegal. There was also a huge lobby of dealers who would see an immediate threat to their business.

At the same time, the Walunjes also knew that they had a strong business and environmental case on their hands. All the dead mileage contributed to damage. If they could deliver diesel to customer doorsteps, they could save emissions equal to planting 24 crore trees. Add to that the cost savings of customers, and it was a no-brainer.

Walunj went about securing approvals for his venture. Trips to Delhi yielded meetings with Dharmendra Pradhan, cabinet minister for petroleum & natural gas and steel, who saw the merit in the idea. He promised to push through the necessary legislative changes, which needed amendments to be passed in both Houses of Parliament. 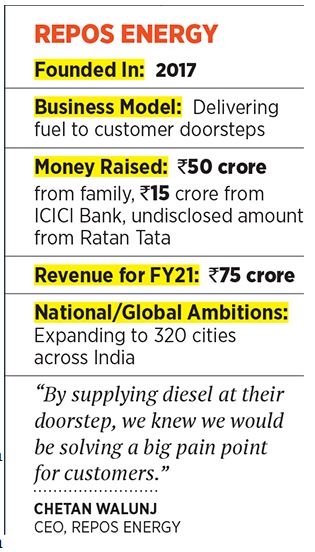 In 2017, Repos Energy was registered and the Walunjes went about looking for mentors and funding. They knew that in order to be a viable business, Repos would have to provide a complete solution to its partners: The bowsers (trucks that carry the fuel), the app to source demand for the fuel, as well as funding.

Their story on reaching out to Ratan Tata is instructive, as it shows what a bit of doggedness can achieve. They drove from Pune to Mumbai, reached his home and sent a letter explaining their idea and requesting a meeting. After about 12 hours, their phone rang, with Tata granting them an appointment for the next day. According to Tata, what excited him about the idea was the fact that fuel retailing was probably the only industry that had seen no innovation. He urged them to think holistically and work towards getting the ecosystem for their partners in place. He also gave them a round of funding, details of which are confidential.

Repos has tied up with Tata Motors to make and market bowsers at a cost of ₹30 lakh. These come with two fuel-dispensing units and can dispense 5,000 litres in a day. All along, Repos was clear that it wanted to create employment opportunities, and decided to give out contracts for operating bowsers to startups registered with the Department for Promotion of Industry and Internal Trade (DPIIT).

One entrepreneur who tied up with Repos is Tharanath Aswathanarayana, who earlier sold kerosene in Bengaluru. With the sale of kerosene stopped, he was looking for new opportunities when diesel dispensing showed up. According to him, Repos is solving a genuine pain point, as only 8 to 10 percent of diesel is sold for personal mobility. The rest is for trucks, tractors, generators, excavators and other equipment. At times, they are unable to travel to fuel pumps to fill their tanks.

So far, he says the economics works for single entrepreneurs. Through the single bowser that he operates, he sells between 4,000 and 6,000 litres a day, and gets a commission of ₹2.16 per litre. At an average of 5,000 litres, Aswathanarayana would make ₹3.25 lakh a month. He expects oil marketing companies to revise the commission paid. On its part, Repos helped him get the startup registration with DPIIT and also an app to help him aggregate fuel demand across the zone in which he operates in Bengaluru.

In funding their venture, the Walunjes raised ₹50 crore from their family, ₹15 crore as debt from ICICI Bank, and an undisclosed amount from Ratan Tata. In the year ended March 2021, the company had a revenue of ₹75 crore, up from ₹25 crore in the year ended March 2020. They are now in the market for a new round of fundraising. The target isto get to 320 cities across the country, with 700 to 800 bowsers dispensing diesel.

The above article is a feature of Repos Energy in Forbes India magazine, June 2021. Source